How Does Plaque Lead to Bleeding Gums?

Home/Dental Health/How Does Plaque Lead to Bleeding Gums?
Previous Next

How Does Plaque Lead to Bleeding Gums? 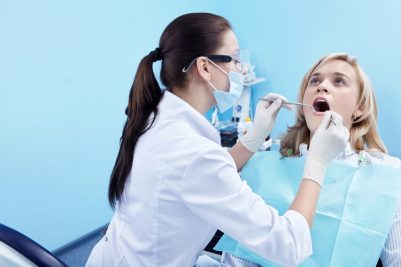 Bleeding gums is a common problem, and many people experience it. However, it is something that most people chose to ignore as there isn’t much awareness regarding bleeding gums. Bleeding gums is a problem that affects those people who do not practice good oral hygiene — if you are someone who does not brush and floss regularly, you will most certainly experience this problem at some point in your life. Plaque is the big culprit. Plaque carries germs and is the source of most of the bacteria in the mouth. These bacteria present in plaque attack the tissues around teeth, which in turn causes the teeth to become irritated and inflamed. It is this irritation and inflammation that causes the gums to become tender and start bleeding.

In short, the real reason behind gum bleeding or gingivitis is plaque build-up. Most people choose to ignore gingivitis because it does not cause any pain. This is a mistake they shouldn’t make as gingivitis or bleeding gums can lead to other major issues, especially gum disease. While we are on the topic, know that, other than gum disease, gingivitis is also associated with signs and symptoms, such as bad breath, loose teeth, and tender and swollen gums. Like gingivitis, even gum disease is also curable, and the damage done by it can be easily reversed. However, this damage can be reversed only if you see a dentist at the right time.

Now, coming back to our original question: how does plaque buildup in the first place and how does it lead to bleeding gums? People who do not brush and floss regularly begin to experience plaque buildup. This plaque, when left for far too long, causes the teeth to separate from each other. In simple words, plaque leads to the emergence of space between teeth and ultimately, small pockets. Bacteria and germs eventually find their way to these pockets and begin damaging the teeth and gums. More importantly, they also damage the bones that support our teeth. With time, when plaque turns into tartar, gingivitis takes the form of periodontitis. Periodontitis is a dangerous condition — it does not only cause tooth loss but also impacts the overall health negatively.

Yes, not many people know this but bleeding gums can lead to other physical conditions, such as diabetes, cancer, heart ailments, etc. That apart, some surveys have also claimed that gum disease can also affect a man’s sexual health. This primarily happens due to the inflammation that bleeding gums cause, which also affects other parts of the body.

Now that you understand what causes bleeding gums and how harmful they can be to your overall health, you would also understand the importance of seeing a dentist as soon as your gums start bleeding. Timely diagnosis and treatment can prevent bleeding gums from transforming into any lethal conditions. If you have been experiencing pain, soreness or tenderness, do not delay seeing your dentist. Call them today and set up an appointment as soon as possible.